Thinking about the TV Deal - by Mark 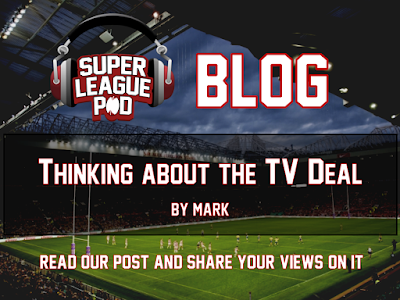 Most serious Rugby League fans in the UK know that the Super League TV deal is up at the end of the 2021 season.

Whilst the last deal with Sky, negotiated by The RFL, has certainly brought in large sums of money for the Super League clubs, the finer details weren't really all in the best interests of the clubs, the game and the fans. The ability to change a fixture at less than a weeks notice is probably the stand out in that regard.

One of the main determining factors in Super League splitting from The RFL at the end of 2017 was self-determination over the next TV deal - the major source of income for most clubs. So, they have to get it right!

My understanding is the Super League board are looking to appoint an external party to help them weight up all the options and permutations. I think that nothing is off the table - from how many games are televised, to who televises them and beyond.

I don't know how strong the Super League's hand is going to be in these negotiations, but there are a few things I think they should be looking for:

Thanks for reading and please comment with your thoughts on what Super League need to go to the negotiating table looking for from the new deal.