My Coach of the Year - by Alan 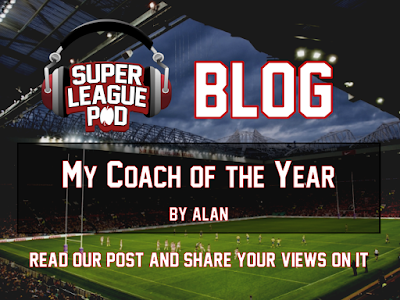 Whilst his peers might not agree, in sufficient numbers at least, I would argue that Ian Watson is the coach of the year.

There can be no doubt that Justin Holbrook has done a magnificent job with Saints this year; a record winning margin to finish top of the league, making both finals and generally playing a style of rugby that is to be admired and appreciated. I would certainly make Saints my team of the year right now but if you are considering where a coach has had the greatest influence, it has to be Watson and his Red Devils.

There are two primary factors that drive my decision – the quality of squad available and the performance against expectations of the wider rugby league community.

Let’s deal with the squad first. There was no doubt that the Salford squad had talent when considering their prospects at the start of the year; the primary worry was the abilities of the players surrounding the star names and the broader depth of the squad.  In terms of that depth Salford’s ability to keep a broadly settled line up was crucial, especially for their pivotal players.  Of their 35 games of the season so far Niall Evalds, Joey Lussick, Josh Jones and Jackson Hastings all played more than 30 times.  They also managed the merry-go-round of mid-season signings incredibly well, especially for a team where financial stability is always a concern.  The swap of Lui for Lolohea was well managed and Lolohea seemed to settle in well, much more successfully than at Leeds in any case.  What really stands out for me is the performances that Watson was able to get from players that I admit I dismissed as squad filler in January; the likes of Gil Dudson, Adam Walker and Greg Burke looking like capable top division performers.  Watson also had great service from his older statesman in the team, the likes of Kris Welham, Krisnan Inu, Mark Flanagan and Tyrone McCarthy.

Bringing together all these elements resulted in a chemistry and team spirit far beyond what we could have expected, which is a testament to Watson’s abilities.

I, and many more qualified rugby league voices, had Salford either 11th or 12th this year, a similar level of expectation to last year which saw them in the Qualifiers, even if they won the league that no Super League team wanted to be in.  I recall the most optimistic Salford fans had them at the edge of the playoff race which we had a good laugh at and dismissed as nothing more than the rose tinted view of supporters.

Even the most hopeful fan in the ‘shed’ couldn’t have foreseen third in the league and a trip to Old Trafford, and in some style too.

Statistics illustrate how good their year has been, second in tries scored behind the run-away Saints, but the fewest errors of anyone.  They tackled well with the third best missed tackle rate even if they were closer to the middle of the pack in terms of average metres gained and clean breaks. The high number of attacking kicks, second in the league, would suggest that their attacking structure, which you can credit to good coaching, was key to their success.

The performance of the team has led to individual recognition and deals at higher profile teams but the alchemy of developing the success of the Red Devils in 2019 is a testament to Ian Watson and is why he should have picked up the prize for me.