Rugby AM recently shared their all-time Super League table and a few people shared it our way, which we appreciated, but don't be thinking we (well, Mark) didn't already have our (his) own one ticking along!

So here it is: You'll maybe notice a difference to the one shared by Rugby AM. We see the Super 8s phase of the season as the play-off phase rather than the regular season, so those games aren't included just like old-style play-offs and finals aren't counted.

The table speaks for itself, but there is something I want to draw people's attention to. Only six sides have a better than 50% win success and only seven sides have a positive points differential - one of the sides in both lists is Gateshead Thunder!

Also, before anyone brings it up, the ill-fated Shuddersfield merger is included in the Giants numbers. Not because we forgot it happened, but because we haven't forgot that they played their home games at Huddersfield in Huddersfield colours and were quickly just Huddersfield again after just one year.

SLP
Posted by Super League Pod at 10:28 pm No comments:

This year was the birth of the new era. The dawn of the eights. So I thought the most fitting way for me to wrap up 2015 would be to have a stats run-down of the Super 8s.

The two things I'll be looking at in detail are the match stats compared between the Super League 8s (SL8s) and Qualifiers 8s (Q8s), and the results of games across the whole of the season.

You would expect to see something in the numbers to highlight the difference in quality between the sides in the SL8s and the Q8s. Maybe not in attacking stats so much, but certainly in defensive and negative numbers (errors and penalties).

What you actually see are remarkably similar numbers when looking at the averages from the 28 weekly round games in these competitions. So what observations, if any, can we make?
These just hint at things though, they certainly don't evidence a big gap between the top teams and the mid-ranking teams.

The most surprising numbers for me come when you look at missed tackles and tackle success. This is where I'd expect to see the intensity and fitness of the SL8s to show through, but there is no difference in these numbers. 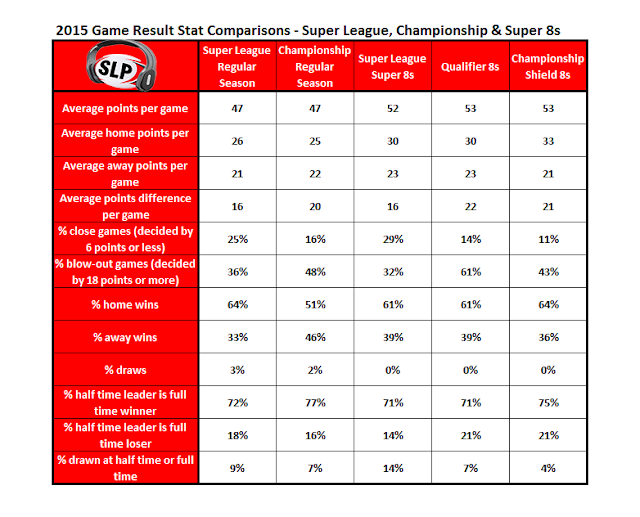 It's when you look at the end results of the games though that you can pull out some more interesting observations.


What we know is the 8s have brought some excitement. What we also know is they will keep being tweaked because more than being about 'Every Minute Matters', it seems to be about trying to please everyone.

Whether these are good or bad things its hard to say at this stage, but I'm sure we'll all enjoy finding out in 2016 and beyond. And I hope you've enjoyed this post as well as the rest of the SLP output in 2015. I'm off to see how the NRL and League 1 fit into all this...see you next year! (and at Christmas...and on Twitter...and on Facebook!)

Posted by Super League Pod at 11:18 pm No comments:

1) SLP Player of the Year

7) Rugby League Beard of the Year

The 'Diane LBW' Award for Tweeter of the Year: Colin Render

The 'Scott Lister' Award for Facebooker of the Year: Brian Davies

The 'Paul Campbell' Award for Fan of the Year: Richard Wilkinson