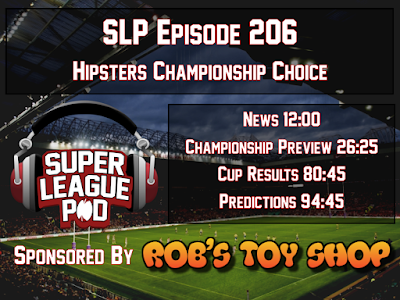 Bradford fan Alan is the host with the most at stake for the upcoming Championship season. So, he gets stuck into a preview of what's to come for his Bulls and all the other sides, as he's joined by Mark to talk about the second tier.

We also have a news recap from around the game, with injury news already unfortunately high on the list of headlines. We'll give you a recap of Round 1 of The Coral Challenge Cup, including what Alan made of the game he was at on Sunday. We make our Super League Round 1 predictions and finish with a quiz. 2019 is truly up and running, as SLP get back in the weekly swing of things!

Find a wide range of toys, gifts, rugby league birthday cards and more at Rob’s Toy Shop on eBay. Visit stores.ebay.co.uk/robstoyshop and on any orders over £5 you can earn 5% cashback, and also 1% of your order value will go into the SLP coffers, by putting 'SLPDiscount' at checkout.

Battle it out with the SLP Family in the Super Bru predictions game!
Link: www.superbru.com/superleague/pool.php?p=11960604

The winner of both comps will get some SLP merch as a prize at the end of the season, so get playing and be a bigger part of the family.

SLP Family!
On this week's show we asked for your support of a crowdfunding effort by long-term SLP family member David Pye. If you want support David's cause, head here: St Helens Academy Tour Crowdfunding

Thank you to everyone who supports SLP!
Please back our Partner Sponsors:
Learn about how you can sponsor SLP here: Super League Pod sponsorship

You can also make a donation to support SLP if you prefer: paypal.me/superleaguepod
All donations are hugely appreciated, large or small. If you donate £20 or more you can pick from an SLP t-shirt (limited stock remaining) or an SLP beanie (order in progress).
Posted by Super League Pod at 12:09 am No comments: 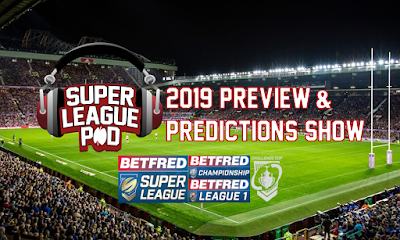 Our Super League Season Preview show is now out! All four main hosts joined forces for a team-by-team run-through YOUR views, squad ins & outs and our predictions for 2019.

SLP Episode 205 is sponsored by Little Warden!
If you have a website, then visit LittleWarden.com and see what they can do to help you. They can help you with domain expiration checks, redirects and all sorts of other important background web stuff that they’ll make simple for you. Little Warden – monitoring the tedious!

You should also check out our 2019 Predictions Show too, here or here.

Thank you to everyone who supports SLP!
Please back our Partner Sponsors:


Learn about how you can sponsor SLP here: Super League Pod sponsorship

You can also make a donation to support SLP if you prefer: paypal.me/superleaguepod
All donations are hugely appreciated, large or small. If you donate £20 or more you can pick from an SLP t-shirt (limited stock remaining) or an SLP beanie (order in progress).
Posted by Super League Pod at 9:40 pm No comments: 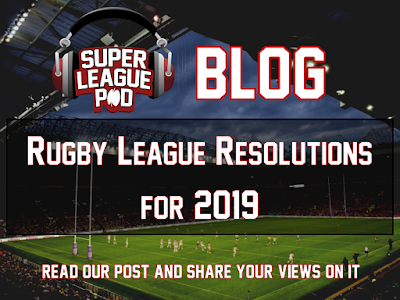 With 2019 now upon us, the hosts of Super League Pod have been coming up with their New Years Resolutions for Rugby League - what they resolve to do and what they hope the game resolves to do...

Alan
In many ways I think the best thing we can do as fans is turn up to games and show our support. With that in mind, I will be going to a match in each round of the challenge cup, starting with Round 1 in January and all the way to Wembley.

In terms of the wider game, I would like us to value each competition more equally, there are only three major prizes you can win so let’s celebrate them! That means clubs, media and fans recognising the differing challenge of winning each and making a fuss about it.  There is much talk about only four different winners of the grand final but the spread of success is much greater if we think about all 3 competitions, by my reckoning of the 12 teams in super league next year 8 have won one of the three trophies in the past 10 years.

Mark
My personal Rugby League resolution is similar to the one I make every year (and break most years!). To get out to games at all levels and enjoy them as a neutral. For me in 2019, that will also include the Women's Super League as well as the usual League 1, Championship and Super League. I will see at least two games in person at each level. For Super League, I will see at least two neutral games in person. If you want to catch a game with me, let me know.

For the wider game, my resolution would be for us to put more attention on the players. That doesn't just mean in the good sense either. But for fans, it means hold the players accountable for wins and losses, not the referees. For TV producers, it means cut the reaction or celebration of the players when something happens, not the coaches. For the governing body, grab a hold of those England players, or those highlight reel players, and get them out there in public, in the faces and minds of the next generation of fan. For the press, speak to the players more, tell their stories, their histories, talk up their highlights and their value. And for the players themselves, don't cheat your opponents, make it about what you can do, not what you can get away with!

*I've been thinking about it and I wanted to add another one to my list. I'm going to endeavour to share/retweet any and all player profiles or interviews that I come across on social media. We spoke about making players superstars on the recent SLP Debate Club episode, and I think making sure we spread what coverage we get as far as we can will help! And, we might just encourage media outlets to give Rugby League more and better coverage by giving them link-clicks and social media 'impressions'.*

Sarah
For me personally, it's to try and get the balance between two non-rugby loving children and watching as many games as I can with my rugby mad third child!

For the game as a whole, simply lets stop shooting our selves in the foot. There are enough people out there to give us bad publicity so let’s not add to it.

Tim
I hope we look outward rather than inward. Think of the most talked about games from the last couple of years - New Zealand vs Tonga, The Million Pound Game and The Challenge Cup Final - they've all had one thing in common, an international dimension. Therefore let's play this up and keep making opportunities for our best players to do their thing. This international flavour is something we can make our own so let's keep letting people know we're here!

Personally I'm going to introduce more people to the game this year.  I've already got some plans for family and friends and I'd urge you to do the same! I'd also like to get to some games I wouldn't normally go to, life permitting!

There's our resolutions. Feel free to share yours with us.

As always, thanks for reading and Happy New Year to you all!
Posted by Super League Pod at 8:39 pm No comments: