System Overload - Should we rethink the Super8s? 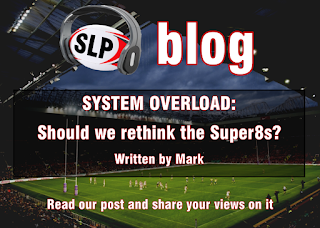 As a straightforward question, for me it has a simple answer: No, we should not rethink the Super8s at this point.

It is a little bit more complicated than that of course, but as this is an opinion piece I thought I'd make mine clear from the start.

If you asked me if the Super8s was my preferred league structure I'd have to say no as well, but there is no perfect structure for British Rugby League - us, the fans, won't let one exist.

Let's go through the options we've seen in my lifetime:

A couple of those were contrived for bigger changes to happen or because teams dropped out of the league for whatever reason, but I'm 31. That's a new league system for every 2.5 years I've been alive.

Broken down though, there's four main types of system, or roughly one for each decade I've lived in.
None have been universally popular. All have their supporters and their detractors, because all have their strengths and their weaknesses.

Before then play-offs it was argued that too many seasons were done too long before the business end, and the eventual winner was becoming too predictable. That started to become the case with a 5 team play-offs too. Plus, the new teams that came up invariably struggled to compete.

The play-offs can be called contrived or artificial. In their 6 and 8 team versions there was criticism that average teams could win the competition and you didn't have to perform all year to be winners.

Now, in the Super8s, the system is again being slated for too many dead rubbers, with a couple of teams in each of the 8s not having much left to play for with a number of games left. Unsurprisingly the leading calls for change come from clubs in those positions.

I'm not saying I love the 8s or that they're perfect. There are too many games played by our top players for a start. And I'm no real fan of promotion and relegation as a way to strengthen the top level of sport. But they do smooth out some of the problems seen by other systems. They combine being where you end up on merit with drama and excitement of one of occasions. They provide a rounded test for teams and offer an opportunity for staged progression up the leagues. They're not perfect for anyone, but they're not absolutely bad for anyone either.

What people have to realise though is there is no magic formula. There is no perfect fix. We should allow the system we have to settle in, become the norm, find a pattern, before we make wholesale changes again as a sport to the way our competition is formatted.

To be honest, all this fiddling ignores the the fundamental problem in the sport. There isn't enough money and there aren't enough well-run, well supported clubs.

The challenge I feel is for those clubs with 'dead-rubbers' to come up with inventive ways of selling these games to their fans. The challenge for them then is to be better next year, take more points more consistently off the teams ahead of and around them, so that they don't leave their fans with games at the end of the season that have relatively little hanging on them.

We shouldn't even be thinking about competition structure again until we have at least 16 full-time clubs all reasonably capable of recording double figure wins in a 'Super League' season. What we should, as a sport, be worrying about is getting to that point.

Increasing the cap for full-time second tier clubs is a step in that direction. What would be a better step is open and widespread knowledge sharing between clubs. What works well for one club in increasing revenues should be discussed with other clubs. The clubs should all recognise that they are not competing with each other off-the-field, they need to work together in that area for the good of the league and the sport in this country.

We should also be looking for a way in increase revenue sharing and look at ways of spreading out young talent distribution around the full-time clubs - these might be harder to achieve as they would have more impact on the on-the-field competitiveness of sides. Owners would be more reluctant to share things out in this area. Maybe if they had a chat with some of the club owners in arguably the best run and best off sports league in the world, the NFL, they might get a more rounded picture.

So back to my opening question. No we should not be rethinking the way the Super8s work right now. There are more fundamental issues that we should address that would make the system work how the RFL are looking for it to, but in a fair way, taking into consideration merit as well as excitement and competition.

Thanks as always for reading. Please let us know what you make of it and make sure you listen to our show every week to keep up with the latest from SLP!

Mark
SLP
Posted by Super League Pod at 12:10 am No comments: