SLP 2017 Season Review Show - How to get involved 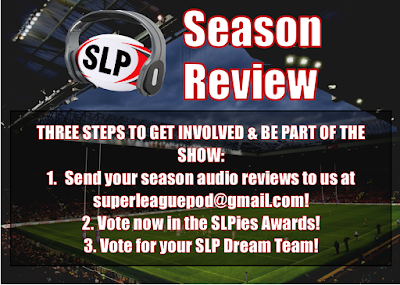 With the Grand Final slipping into the rear-view mirror, the time is coming to wrap up another season of SLP!

We'll be bringing you our Season Review show on/around 24 October, when we'll look back on last February's predictions (good and bad!), as well as giving some stats and views on each Super League side, and most importantly we'll be including your views on the year that we've just seen. We won't have a show without your input!

There are three ways you can get involved, and we would encourage you to do all three!

1. SEND US AN AUDIO REVIEW OF YOUR SIDE'S SEASON (by email to superleaguepod@gmail.com)

We're looking for just 2-3 minutes on your overall takeaways from 2017 as a fan of your club.

Make the review your own, tell us what you want people to know about your team's season! Some example topics if you're struggling might be high and low moments, best players and performances, youngsters who have made a name for themselves - whatever you feel needs to be said.

You should be able to record them on your phone or other devices easily enough, then email them to us at superleaguepod@gmail.com. We need your reviews in by Sunday 22 October to make the show.

If you don't follow a Super League club, or follow more than one side, don't worry, you can get involved too! We're happy to get your takes on your Championship and League 1 sides too, and we'll give you our under-informed takes on your sides as well! Please send us separate reviews for each side you support.

2. VOTE IN OUR ANNUAL LISTENER AWARDS, a.k.a The Sloppies - Vote HERE!

Our Awards try to cover the good and the bad of the Super League season. We give you a short list, but you also have full freedom to give us your winner if they aren't listed by us. Voting will close on Sunday 22 October at 9pm UK time.

We've brought in a new category this year, so look out for that, and we've also introduced an entirely non-mandatory listener feedback section as well, just to help us get a bit more insight into our listeners. Don't worry, any feedback you give won't be shared with any other party, and if you don't want to answer any question, you don't have to.

We all know the real Dream Team is the SLP Dream Team! We've given you options from putting our heads together to allow you to pick a team you'd be proud to see pull on SLP jerseys. Voting will close on Sunday 22 October at 9pm UK time.

We know that you'll all leave club bias to one side to help pick the best team you've seen this season, or we at least hope you'll try to!

After that, all you'll have to do is wait until the show is released!

Picking at the Bones - Who might get picked up from relegated Leigh? 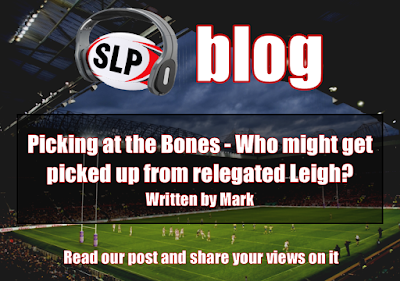 Leigh's brief stay in Super League has ended so now attention turns to the future. Often that has meant a large player turnover, whether relegated sides stay full-time or not. For Leigh, player turnover will be nothing new after a couple of years in which they've used over 50 players. It's inevitable they'll lose a few players, so let's have a look through their squad and see who'll be candidates to move on.

I'll start with a player who hasn't even got there yet. Bryson Goodwin has a decent track record with 6 tries in 9 internationals for New Zealand and 76% career kicking success. Although he's a little off a 1 in 2 try strike-rate, 71 NRL tries in 178 games over 10 years means he's likely to have other suitors if he can get out of a Championship contract with Leigh. Widnes aren't deep at centre, Wigan could be in the market for a goal-kicking centre, and Warrington and Catalan will be having big squad overhauls. *Edit - We now know that Warrington have taken up Goodwin's contract*

Now I'll be looking at the playing side that fell out of Super League in the Million Pound Game.

If they weren't at Leigh, senior players like 36 year old Mickey Higham and 34 year old Danny Tickle probably wouldn't have gone around in Super League this season, so I don't think they'll be on anyone's wishlist even if they wanted to make themselves available. Harrison Hansen, although a little younger at 31 - he'll be 32 when 2018 kicks off - and with a strong Super 8s showing, may have suitors but I think he's most likely to stay at Leigh. Glenn Stewart is another nearing the end of his career. He wasn't as influential in attack or as hard-working and successful in defence as he was in his year at Catalan. He's contracted to Leigh next year and I'm unsure how many sides will be in the market for a 33 year old on an apparent decline, but he offers good leadership that someone like Salford may look for.

Of the other forwards from the MPG, Liam Hood and Lachlan Burr may be the most likely to attract some interest, unless Catalan go on a French player round-up for Antoni Maria. Both Hood and Burr are in their mid-twenties. Hood has generally saved his best for when the TV cameras were around this year, so teams who might want a back-up hooker with a change of pace may see him as an option, Wakefield or one of the Hull sides maybe. Burr has been one of Leigh's most consistent metre makers, especially in the Qualifiers, and was their best offloader this year. He's a player Catalan or Widnes could benefit from, but Huddersfield would be a good fit I think.

In a bottom four side that has ultimately gone down, both MPG halves have impressed me in 2017. Ben Reynolds impressed me almost every time I saw him, he's a dual run/pass threat with 9 tries and 9 assists over the season, along with a 80% kicking success rate and a good all round kicking game. If he can be attracted away from Leigh, the side that relegated them in the MPG that would be an ideal fit - Catalan will need a running threat to replace Myler and it looks as though they'll need a goal-kicker if Walsh leaves. Josh Drinkwater contributed double-figure assists, showed control in the kicking game and kicked a healthy 3 forty-twenties and showed with a strong Qualifiers record that he can be a good goal-kicker. Widnes, Salford and maybe Wigan could be in the market for a game controlling half back if he hits the market.

In the MPG backs, Ryan Hampshire may have found his best level for now as a Qualifiers level player, but offers good utility and has great speed, so someone like Catalan or Salford who lack backs depth could have interest. Matty Dawson, who has done a little better than I expected as Leigh's top scorer with 15 tries in 29 games, and James Clare who showed up well with 7 Qualifiers tries are also probably in the right place. Both on loan centres might be wanted back at parent clubs. Matty Fleming has earned valuable game time, Ben Crooks has been one of Leigh's best players and if Castleford don't see him improving their squad, Leeds may want centre depth or Widnes could be in the market for that position, and Warrington is an outside chance for me too.

Outside of that, there are a few others in the squad who may interest clubs if they seek a Leigh release.

Daniel Mortimer is obviously experienced in the NRL and fits the bill of many previous Hull KR or Salford signings, but I think both clubs may have learnt from being burnt on similar types of player before. I'm not convinced what the market for him should be, but he'll get another club if he wants one probably. Samisoni Langi made the SLP stats round-up every time he played apart from his first game. It was a fairly small sample size and he didn't contribute as many tries or assists as Leigh would have wanted, but he averaged over 100m a game so clearly is an impact player - Widnes, Warrington or Catalan could be looking for a new centre, and Huddersfield, Leeds or Wigan could want depth there at the right price. Eloi Pelissier feels to me like quite literally the player Catalan were missing this year. Zip, passion and enthusiasm in everything he does, even if that does sometimes slip over the line into penalties or diving. If bridges haven't been burnt, he needs to get back to the Dragons. I can't see another clear landing pad club for him, maybe Warrington who need to replace Brad Dwyer. Mitch Brown has arguably been Leigh's best this year, with the most carries and metres, as well as a rich try scoring form in the Qualifiers. He can play across the back line and do a good job, he brings experience and determination as well as ability and versatility. I imagine lots of sides will look at him. Widnes might be the best fit, where he can play centre and back up full back.

One last player to discuss is Jamie Acton. Yes, he's a thug and a liability given his disciplinary record - 2 sin-bins and 5 charges in 2017, 14 games missed due to suspensions as a result. However, they won a third of his 15 Super League regular season games, no Leigh regular had a better win percentage. His 105 metres per game is also the best of any Leigh regular in the 23 game regular season. 4 tries is good for a prop and he has reasonable defence. If there's any coach up to the task of calming his reactions and focusing his aggression in the right way then Acton belongs in Super League. Sadly, I'm not sure if there is. *Edit - we now know that Acton has committed himself to Leigh*

My guess is about half of the twenty players I've singled out above won't be starting 2018 in the Leigh squad. I suppose one thing relegation does is spice up the off-season transfer market!

A few people have asked about a Grand Final meet up, so we've decided to put some plans in place for anyone who wants to grab a beer with us before the Saturday's big game. We appreciate it's fairly short notice, but do come say hi if you can.

Our plan will be to get to The DOCKyard at Media City for roughly 1:00pm. 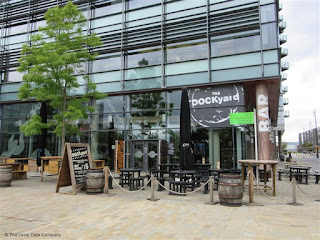 This pub is located close to MetroLink Line D & Line E, close to local bus routes and close to car parking at the Lowry Outlet shopping centre, amongst other places to park. It's roughly 1 mile walking distance away from Old Trafford.

We will then make the walk to Old Trafford at about 4:15pm, which should give us time to grab a beer or two in the Fan Zone before heading inside the ground for kick off. 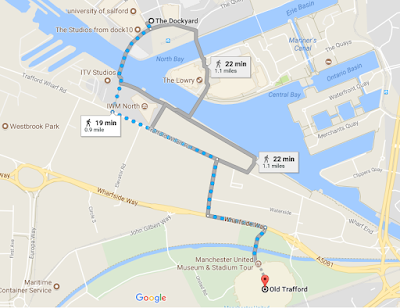 Get in touch with us if you're going to be at the Grand Final on our Twitter or Facebook. If you'll be there and want to contribute to our Instagram also get in touch!