A subject I've written about before is competitive balance. The theory goes that if the outcome of individual games, the season's league standings and the year to year title winners is uncertain and unpredictable then the league will be more popular and successful. It's a pretty reasonable theory. Like all theories, it isn't faultless and there are exceptions (most major association football leagues!), but it's fairly logical and robust.

So how do the biggest two modern day Rugby League competitions compare when it comes to competitive balance? Well, we probably all know the answer to that questions, but I've already made some graphs and tables, so lets have a look anyway. 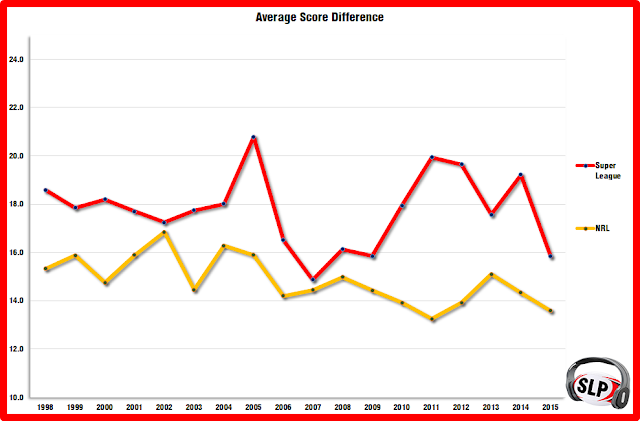 You'll see from the graph that in no season has Super League had a smaller average winning margin than the NRL. In fact, only five NRL seasons have had a worse average score difference between winners and losers than the lowest Super League average (14.9, 2007). Every NRL season has a figure lower than the Super League 18 year average. Every Super League season has a higher figure than the NRL average - only just in 2007's case. Pleasingly, 2015 was a good looking start for the #RLNewEra and the overall Super League trend is downwards in this number since 1998, although to the NRL's credit the downwards trend is even greater down-under.

When you look at the percentage of games that end with a one score or smaller winning margin, the picture is pretty much the same. 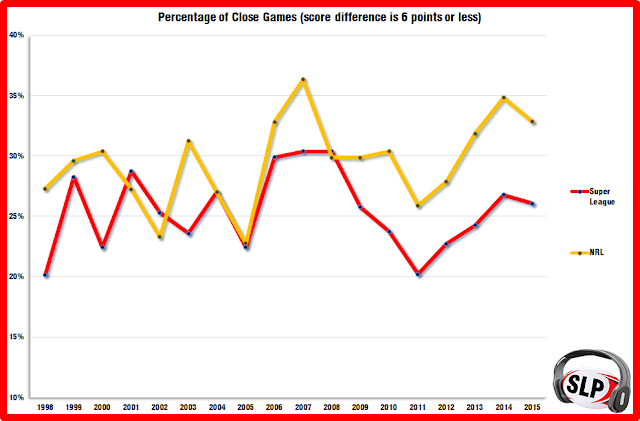 Here, the higher the number the closer things are. At least this time the Super League came out on top in some of the years, with a higher percentage of close score lines than the NRL in 2001, 2002, 2004 and 2008. What is strange here is how the two leagues mimic each other somewhat. I can't explain that. But it's again good to see both trending in the right direction, although again the trend is much stronger and clearer in the NRL.

Unsurprisingly, when you look at the other side of the coin and count up games with wider winning margins, the NRL comes out as more competitive again. 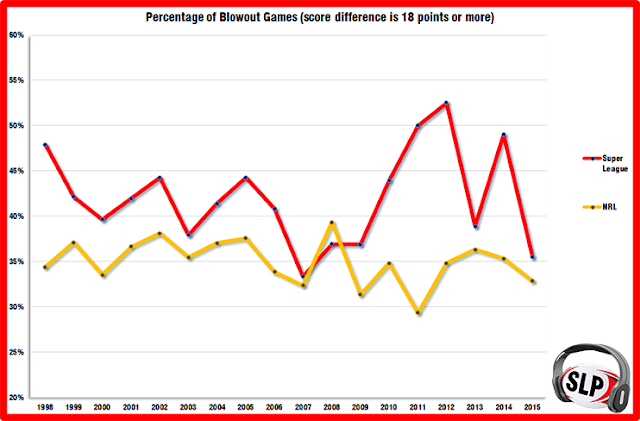 There are fewer games decided by a large score difference in the NRL than in Super League. An 18 point margin might not be a massive difference in the grand scheme of things, but you wouldn't think of a 16-34 score line as close, for example. Quite simply, there are more one-sided games in Super League than the NRL. 2007 was again the year with the most competitive games in Super League, and the only year to come in below the NRL average percentage of games decided by 18 points or more. 2008, though, was the only year to beat the NRL in this category. Worryingly, the Super League trend is for the percentage of such games to increase. However, this is heavily influenced by a couple of really bad years in 2010 and 2011. Happily, 2015 was the second lowest percentage of Super League blowouts we've seen.

A closing positive for Super League is that the playoff stage of the season has traditionally seen more close games and fewer blowouts than the same stage of the season in the NRL - when the top Super League teams play each other, the games are more competitive than the regular season. With an extended playoffs from the Super 8 format, we should see even more of this, which can only be good for the sport in the UK and Europe - as long as the Qualifier 8s doesn't detract from the Super League 8s too much as it did in 2015 on this score (see post from 26 November 2015).

Season outcomes
The traditional medium-run measure for competitive balance is win-percent ratio, where the standard deviation of win-percents is compared to the idealised figure for the number of games played in the league. Put simply, the closer the win-percent ratio is to zero, the closer and more unpredictable that season was. 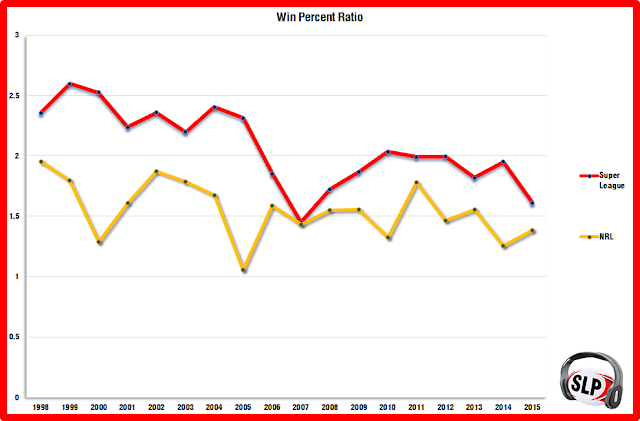 Here we see the same sort of results as the graphs for individual game outcomes showed. The NRL is more competitively balanced than Super League, although both leagues appear to be getting more competitive as time moves on.

Once again, 2015 offers some promise of what the 12 team Super League can offer in terms of more equal competition - although we're yet to see what impact a promoted team might have to that, one way or the other.

Winning outcomes
Concentration of title wins is as good a way as any to assess long-run competitive balance. I don't a graph for this, I have a table. 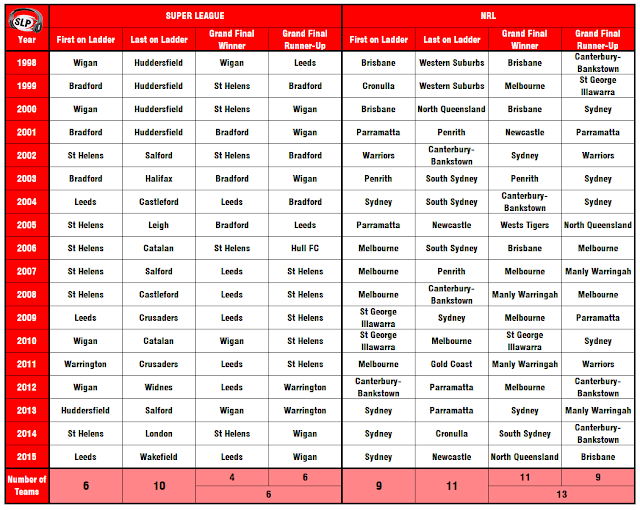 You'll see from the table that only four teams have won the Super League Grand Final. Almost three times as many different teams have won the NRL Grand Final. As well as that, more than twice as many different teams have played in the big game down under than in Super League. St Helens played in six straight finals in one run, compared to the best run of final appearances in NRL being Melbourne at the height of their cheating the cap years.

At either end of the regular season standings you also see a bit more variation in the NRL than the Super League, more notably at the top than the bottom.

In Super League, the 'double' victory of leading the league and winning the final has happened 10 times in 18 seasons. In the NRL, it has happened six times. Huddersfield won a league leaders title after having picked up some wooden spoons in the past, but no Super League Grand Final winner has also finished bottom in the modern era. Six NRL sides have a wooden spoon along side a minor premiership in their trophy cabinet, and six have a spoon next to their Grand Final winning rings - seven if you allow the Western Suburbs part in the Wests Tigers joint-venture to count.

Has this post taught us anything? Maybe not, but at least its given us some evidence to support what we already thought - that the NRL is more competitive and unpredictable than Super League. But, hey, the trends show what is happening in Super League is moving us towards closer competition. That's good. Long may it continue.

P.s. Here's a table full of numbers, many of which informed the above graphs.