Structuring the Future: a different way forward for Rugby League 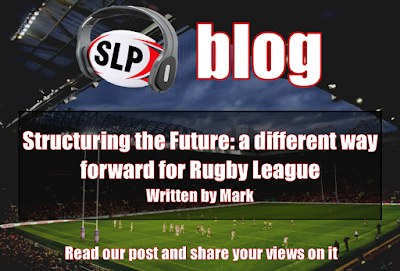 Changes are coming in 2019 it seems. As ever, views are split and no-one agrees. But all the ideas I've seen are things that we've seen before already - a load of tried, tested, moaned about and moved on from structures.

Here's an idea of how it might look, based on current league placings and ability to run as full time clubs in 2019. I'm not a marketing guy, so the conference names are just me spit-balling, but you get the idea. 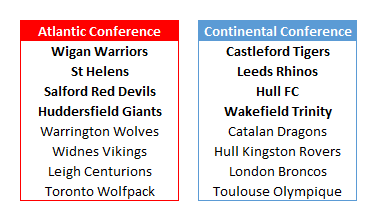 At the moment I'm not convinced we have the depth of quality below the full time clubs to have the same structure in the Championship as in the Super League.

I would suggest for the Championship:

It's really tough to make a call on what to do with League 1 right now, with a some uncertainty surrounding the existing clubs like All Golds and Oxford.

The obvious solution is to copy the Championship set up. That would work well in some ways, but with such low central funding - and crowds - at this level, I think it needs a unique solution given the distances travelled.

I would have a north and a south division, with inter-division play, to help the Southern teams progress still.
It would look something like this:

New entrants can enter in one of three ways. All have to be approved by a majority of member clubs.

Anyway, that's my idea, if we have to change things. I actually think you could apply my Super League structure to the NRL too. Let me know your ideas too!