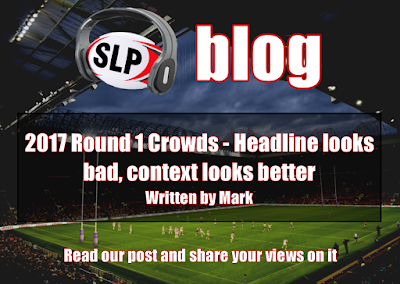 If you take a quick glance at the crowd figures for Round 1 of Super League they look bad. Really bad in fact. The worst opening round average gate since 2003!

That is the third lowest opening round average since Super League began in 1996, and compares to 11,421 for Round 1 last year.

Whilst I'm not suggesting figures like this shouldn't cause the clubs and the governing body pause for thought - we all want higher crowds if we love the game - but I'm here to add a dose of perspective and context to 2017's poor early showing.

The first thing to highlight is that last year's four best attended Super League sides - Leeds, Wigan, Hull FC and Warrington - were all away from home to kick off 2017.

Compare that to 2016, when 2015's best 4 attended sides - Leeds, Wigan, St Helens and Hull FC - all began the season at home, and we already start to get context.

I'll now put things in to more context by sharing the average attendance for all Round 1 Super League fixtures each club has hosted, plus the details of the corresponding fixture in 2016's regular season and their 2016 league average:

*notes on the above: Green indicates figure is lower than 2017 Round 1 attendance, Red indicates figure is higher than 2017 Round 1 attendance. Figures taken from the start of Super League in 1996. All figures are correct to the best of our knowledge, Catalans only have two previous Round 1 figures available, one of which was their first ever fixture. The Round 1 Magic Weekend of 2011 is excluded from all figures.

Addressing each match/home side in turn:

St Helens
Thursday's crowd represented a 3% increase on average Round 1 gates for them. It was 8% higher than their corresponding match-up with Leeds last year, despite this one being on a Thursday and last year being on the more popular Friday night slot. They also start 2017 off with a 14% hike from the 2016 average attendance for all their league games last year. All in all, a relatively positive start for St Helens.

Widnes
Probably the biggest disappointment of the round, but given the doom and gloom around predictions for both sides in 2017, not entirely surprising. Even so, there's still some green on the board as the corresponding match in Round 16 last year had a lower crowd than this one, a 7% increase was seen. The 36% drop on previous Round 1 Super League home game average and the 8% drop from last year's average crowd figure are both disappointments that Widnes will be working hard to address I'm sure.

Castleford
With no corresponding fixture to compare to, we can still see that Friday night's crowd was marginally up on the all-time Round 1 hosting average, albeit less than 0.5% up, but more promisingly 14% up on the 2016 home average for the Tigers. A start they'll surely look to build on as bigger clubs come to town.

Salford
Clearly a bright start to 2017 for the Red Devils off the field, helped it has to be acknowledged by a large travelling Wigan contingent. That contributed to a 6% bump on historic Round 1 crowds for Salford and a massive 94% uplift compared to 2016's home league figures. Still, 53% up on last year's match-up between these sides isn't to be sniffed at.

Catalans
2017 starts with a bit of a downer crowds-wise for Catalans, with the chart above showing all red. Worth noting though that the difference between this game and the 2016 regular season fixture between the two sides was only 17, so not really a difference at all. Perspective should be added around the Round 1 average figures for Catalan too. This was only their third Round 1 home opener since they joined the league. In their first, against Wigan, their first ever game, they had 11,000 watching. In 2009 they hosted Huddersfield in front of only 7,520, so its not a great sample size to draw from. Of course, the 5% drop at this game from their 2016 average isn't great and something they'll hope turns around as the summer months come along.

Wakefield
After a few years of disappointing crowds, three green lights for Wakefield is a big plus. A 5% increase on what was their second best 2016 home crowd is a great start. It's also a 5% increase on their longer-term Round 1 average. Even better, it's 41% up on their 2016 average crowd. Hopefully we'll see more of the same from the Trin faithful this year.

So, should we be happy with 2017's Round 1 crowd figures? No, not even in context, but that's because we should be striving for more and not settling for where we're at, and not because the figures for each of the games we saw were bad.

Thanks for reading, hope you found it interesting. Make sure you look out for our shows each week for more of this kind of stuff!

*Edit: I've now seen an alternative crowd figure for Salford v Wigan of 6,527, that takes the average crowds for Round 1 up to 8,026. My original figure was taken from the Salford Twitter feed. As this doesn't change the overall theme of this piece a full revisit isn't planned.
Posted by Super League Pod at 7:18 pm No comments:

Rugby League Hierarchy - An Idea For The Way Forward

In my often stated opinion, the NFL is the best run pro sports league in the world. It isn't without it's issues I'll admit, but it leaves the way the Super League is run languishing way in the distance.

I'm not a token Red Hall basher. I think the people that run the sport genuinely care about the game, at all levels, and want it to progress. They have made and continue to make mistakes though. And they aren't always helped by the clubs, which aren't always particularly well run either and don't always look out for the interests of the game as a whole, sadly.

A big part of the problems and difficulties to me comes from the organisation that fronts our professional game also fronts our international side and our community game. I understand there will be degrees of separation, but the RFL sits at the top of it all and I'm certain nothing significant would go through without their stamp of approval. In my opinion, a whole game approach can be achieved successfully without hands on RFL involvement in all aspects.

The other big part of the problem to me, looking in from the periphery, is that clubs generally compete with each other first and support each other second.

I have an idea, of sorts, on how to address these feelings and concerns I have. Separate the professional game and the amateur game more decisively. Have the RFL run the wider community game, control the Challenge Cup still and oversee the international game in the UK, but take Super League and the Championship/League 1 out of their hands, to be run by the clubs. All the clubs.

I'm not suggesting the RFL wouldn't still have a seat at that table, they just wouldn't preside over it.

I feel that if you make the owners/executives of the clubs equally responsible for the professional game then they will work harder together to increase the size of the pie, rather than compete with each other or against the RFL for just a larger slice of the pie currently being served.

You would and should insist as part of the charter of this newly reinforced professional arm of the game that a certain proportion of the pie gets handed over to the RFL for their work in the community game. Similarly, revenues from the Cup final and internationals can be shared equitably from the other direction. You would also insist clubs have an in built responsibility for giving up a certain amount of their full time resources to local community initiatives.

Crucially though, the clubs would all get to play a part in moving the professional game forward, without wider political forces influencing decision making.

They would still, in some capacity, answer to the RFL and the wider interests of the sport. But, importantly, the RFL would also answer to the professional arm of the game in how it manages and allocates the resources handed to it.

In the NFL, focusing the progress of the professional sport on the team owners brought about great progress. The merger with the AFL, the rise to the top of America's sporting agenda, the increasing international expansion, progressive rules for interviewing minority candidates for key roles, successive collective bargaining agreements with players. All have been helped by the management structure of the league, largely able to make its own calls without having to spread itself so thinly to cover all aspects of the sport from grass roots up.

It's time the clubs ran the professional game and the RFL answered to them.

That's my opinion anyway. Well, my opinion today, at least. No doubt it'll swing the other way and back again regularly. Nothing is ever settled for long in rugby league after all.

Posted by Super League Pod at 7:38 pm No comments: