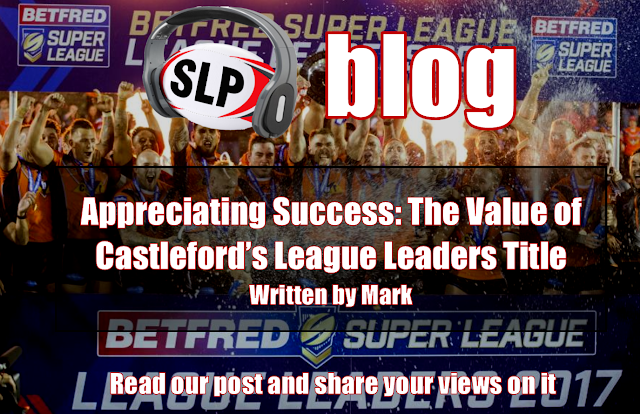 They've won the League Leaders title and done so with four games to spare. They've obviously been the best side in Super League this year. Very good in defence, peerless in attack.

The debate/banter amongst commentators and fans now turns to the value of what they've achieved and the level of celebration it deserves.

In my book, they aren't the Super League champions. They side will be crowned at Old Trafford in October. However, that should never take anything away from what the League Leaders title means or is worth.

There are three major trophies available in Rugby League - the Challenge Cup, the League Leaders Shield and the Super League Trophy (with the bonus of the World Club Championship opportunity to the winners).

All three are special. Winning any of the three should be considered a success. All three require slightly different things to achieve:

I know they aren't all quite treated equally right now and everyone has their preference or viewpoint. I'm asking anyone reading this to put that behind them, move on from it, start celebrating all the successes equally. I think we'll all feel better about things!

Having a proper presentation and giving medals for the League Leaders winners, and giving it more equality in terms of prize money, are all things that help give the most maligned trophy more kudos. The last step will be to move its award back to the end of the regular season. That should give the winner more time to celebrate it in its own right, without it coming too close to the cup or grand final.

If we as fans start flocking to Wembley for the climax of the cup, whoever the sides on the field are, that addresses any loss of magic there.

The Grand Final sees the champions crowned, no change needed there.

So, fans of Rugby League, I'm calling on you to recognise all the successes equally. Are you with me..?

Mark
SLP
Posted by Super League Pod at 12:03 am No comments: