Get excited. A new episode os SLP Shorts is up for you to listen to!

In this latest SLP (not so) Short, Mark is joined by England RL super-fan and all-round supporter of the international game, Brian Davies, to get the full-Bri take on the 2018 International season. We cover England's games, other results and your views on what we've seen this autumn/winter. To be honest, we think we did well to cap it at 50 minutes, so enjoy!

You can listen to it HERE, or find it HERE if you're an Apple Podcasts person. You can also get it on the League Cast Android app, Podcast Addict app or on YouTube. Also find us through rugbyleaguemedia.com!


Another way to support SLP is buying your international Rugby League gear from Mascord Brownz using the following link: mascordbrownz.com/?affilates=8
With Christmas coming up and so much choice on the site, it's a great way to find the perfect gift for the Rugby League super-fan in your life (or, you know, just grab a treat for yourself!).
Posted by Super League Pod at 10:21 pm No comments:

Tommy Makinson and the Golden Boot - by Mark 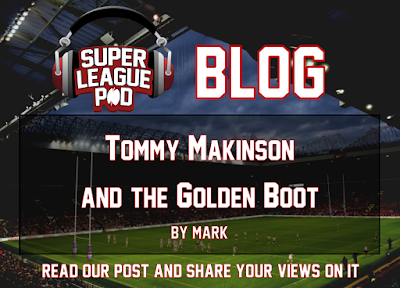 Well done Tommy Makinson on deservedly being chosen as the best international rugby league performer in 2018.

He made a brilliant try scoring debut in Denver, off the bench, in his less preferred position of centre. Arguably the outstanding moment of that match was his pick up and offload to set up Elliott Whitehead's second try, knowing he would wear a big hit from it. It showed all his attributes that us Super League fans know so well - instinct, speed, tenacity, bravery, strength, skill. He backed that up with a strong showing in Hull. A great kick take in the build up to the opening try and an emergency stint at full back notable features. Then he really blew the lid off things at Anfield. Possibly his best ever defensive display and a match winning super try to round off a great hat-trick.

That brief list of highlights show that his place as the best international performer is well deserved. Whitehead must have run him close. And it can't have hurt Tommy's chances that the timing of the award was after his man-of-the-match game rather than after a different game. Maybe a week earlier and Whitehead would of won it, maybe a week later and (I'm projecting here, writing this before the third test) John Bateman or Jake Connor could have won it.

This takes absolutely nothing away from Tommy Makinson or the panel who voted on the award. Those that voted for him, did so on the criteria they were asked to, and I'd say came up with the right choice for that criteria. He deserves the title of best international rugby league performer in 2018, as of 7 November 2018.

It does, however, take something away from the award he has won.

Before I address the biggest elephant in the room, I'll return briefly to that smaller, albeit still messy and noisy, elephant. The RLIF need to be pulled up on the timing of this award. If we're only giving it out on international performances, why has it been given out with one game left to play in the biggest international series of the year? What if the series was undecided after a Dallin Watene-Zelezniak last minute response to Makinson's hat-trick? Who would then have won?

In non-World Cup years we only have a handful of games at most for players to show themselves at international level. Yet we're giving the award out with 20% of that international season left. This is utterly ridiculous. The RLIF need to fix this nonsense for future years. As often with rugby league administrators, I seriously fear they won't.

Then the biggest issue. The same award, the Golden Boot, has been handed out for a totally different criteria to the past. I say it makes a mockery of the award. (It's actually this opinion that led to this blog post. It was asserted, falsely, that had a Wigan player got the award I would have celebrated it fully and not challenged it at all. You all should know me better than that by now!)

The Wikipedia Rugby League Golden Boot Award page currently says: The Golden Boot is given, usually in December after the conclusion of all the year's matches, to the player adjudged to be the best in the world, as determined by a ballot of international media representatives.

Well that needs changing now. Because that isn't what Tommy Makinson won the award for.

If Makinson had, instead, won the 'Rugby League Internationals Player of the Year' he would have received the same level of deserved credit and praise as he has, without the same level of outcry and bemusement we've seen.

How can anyone think it's sensible to take what had become regarded as the award given to the best player in the world, and give it to the player making the biggest impression over a handful of international games?

Why oh why do our sport's governing bodies keep giving us reasons to in-fight, argue and so easily criticise, when instead we could be having a celebration? You might say that I could ignore these issues and just celebrate. But don't we want to do things right? Or would you rather let those in charge do whatever they want and we just deal with it?

I know there are bigger issues facing our great sport. But huge PR gaffes like this just go to demonstrate that those people currently running our game aren't up to the challenge of facing down and conquering those bigger issues.

Thanks for reading as always! Please make sure you also listen to our shows during the off-season.

You can listen to them HERE, or HERE if you're an Apple Podcasts person, and you can also get it on the League Cast Android app, Podcast Addict or on YouTube. Also find us through rugbyleaguemedia.com!

Another way to support SLP is buying your international Rugby League gear from Mascord Brownz using the following link: mascordbrownz.com/?affilates=8

Posted by Super League Pod at 11:47 am No comments: