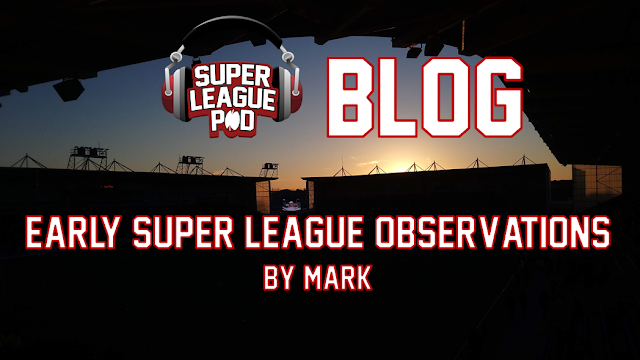 In an effort to trim some fat from the weekly podcast shows, I’ll try and give my opinions in semi-regular blog posts as the season moves along this year. No promises on either the trimming or regularity however!

Super League is only two weeks in. We can’t draw any firm conclusions at this early stage but we can make some observations on what we’ve learned so far.

St Helens are top. Wigan are in the top three. The two teams that fought out one of the most intense games of Super League we’ve ever seen in last year’s Grand Final are still the teams to beat.

St Helens have basically picked up where they left off, with the new forwards fitting in seamlessly and Jack Welsby still being the best second-best option in any of the back spots that a Super League team has. They’ve won both games comfortably, albeit it arguably not on full throttle in attack. Their defence is in top gear though. Both of their opponents have not only struggled for points but even struggled for metres. St Helens are the only team to keep their opponent under 1,000 metres in both opening games according to the official Super League website stats.

Wigan have had two games with what could politely be called scratchy first halves, but fairly dominant second halves. They have a cumulative 14-24 first half, and 40-0 second half, after two games. The impressive thing is they’ve won both games with very patched up backlines, missing their two biggest stars in game one and with two backrowers as centres in game two. These two points show Wigan are still as fit and as resilient as any team in the league.

I didn’t expect much from Castleford this year. The early signs are they might prove me wrong. Jake Trueman and Paul McShane have started in top form, Niall Evalds has slipped in really well too. They showed a great attitude and adaptability in adapting to losing a half back early in game one against Warrington. There’s still some depth concern for me with the Tigers. They were down a couple of bench players from game one to game two, and I don’t think the bench gave much against Leeds. But the early signs are the team are definitely playing for Daryl Powell to go out on a high.

The other team starting really well is Hull FC. They only made two off-season signings – one Josh Reynolds on the pitch and the other Brett Hodgson off the pitch. The third big off-season move was Jake Connor to full back on a more long-term basis. All three look good at this stage. Hull are playing a more fluid and expansive attacking style, pivoting both Connor and Reynolds around Marc Sneyd. Plus, their defence has looked pretty solid. Scott Taylor coming off the bench seems to be really helping avoid any drop off in that area when the starters get tired.

Watson has work to do

Huddersfield haven’t hit the ground running under their new coach. There has been a bit of turnover in the squad, albeit mostly with adding better players rather than losing any starters. But, the combinations just aren’t working yet. With some benefit of early season doubt, the Giants are missing their best and most important player, with Aidan Sezer not playing yet. They also missed captain Michael Lawrence in game one, and star signing Ricky Leutele in game two. Maybe, in fact probably, they need everyone on deck to be the team I thought they could be this year.

Full back could be Wane’s biggest World Cup decision

October is a long way away. And injuries or form could impact the thinking hugely by then. But it looks like Shaun Wane could have a tough call to make on the full back spot for England. Sam Tomkins, Jake Connor and Niall Evalds have all started the season strongly. And Zak Hardaker has found himself back in his personal favoured position too, with two strong performances for Wigan.

Then outside of these main contenders, there’s also been a challenge at times of fitting Gareth Widdop and Jonny Lomax into the same international side. George Williams is surely nailed on for one of the half spots. That could mean Wane does what others have done before to get both Widdop and Lomax in, play one of them at full back. This seems unlikely though given the quality options playing there week-in, week-out.

I’d be going with Tomkins. To me, he has the most complete game of the options. Hardaker might be slightly better defensively and running the ball. Connor might have a slightly better long kicking and short passing game. Evalds might be a better support runner. But Tomkins has the most overall. He’s a better ball player than Hardaker. He’s more of a team player and experienced campaigner than Connor. He’s a better defender and organiser than Evalds. Add in that he’s worked with Wane before, in fact won a Man of Steel under Wane. And, if we’re all honest with ourselves, he’s been the best player on the pitch in both the games he’s played this year, and most of the games he played last year too.

Do look out for our next podcast episode, out tonight (late Monday UK time), where we’ll recap the Mose Masoe Round and look ahead to the Super League clubs entering the Cup, plus discuss all the latest news, all helped with your fan views.

Mark
SLP
Posted by Super League Pod at 11:26 am